When we left off, the mania of the day of filming had been perfectly captured and distilled into the act of me running across my backyard, yelling “I WANT TO GO TO JAPAN!” while throwing my fist into the air for a Japanese film crew in the 90 degree July heat of a classic Florida summer, hoping the neighbors weren’t watching.

After that I was absolutely bursting to tell everyone what happened, but I was advised to keep it a secret! I followed up with a thank you to Naomichi for reaching out in the first place:

If you just skimmed over that last email, I’d like to draw your attention to that last part: “Did your husband enjoy the filming as well?…Filming can go super crazy – Sometime make married couple fight…”

…hmmm – nope, no fighting. In fact, Ryan’s boss added “visit by Japanese film crew” as an excusable absence from work to the company handbook to make it official.

After that…well I was just waiting in limbo, hoping they’d let me know when the show would air so I could tell everyone on Facebook!

AND THEN THE DRAMA STARTED:

Umm. what?!Â Let me just check my cal-Â YES I AM AVAILABLE! I email back immediately.

…aaaand I don’t hear anything back. Until two days later: I was calmly lying down in my acupuncturist’s office listening to the sounds of soft pan flute and waterfalls, inhaling the calming essence of lavender and whatever else, with about 7 needles stuck in my head (this was all extremely calming, I promise!) when I hear:

“weird” I thought, “whoÂ could possibly beÂ calling me? I thought I’d already trained everyone to never call me because I hate talking on the phone…oh well, maybe it’s a robot calling me…” I slip back into quiet contemplation. For about five minutes.

“WHAT?!Â …oh no!Â Maybe this is like the time that drug dealer in WorcesterÂ gave out the wrong phone number, and all his customers started texting me at 2 AM!? AAAaaaahhhhhhhh!!”

(p.s. you know what prevents you from picking up the phone at the acupuncturist? ALL THE NEEDLES IN YOUR HANDS)

“OK“ I thought “THIS IS JUST A ZEN TEST. MEDITATION TIME. ALLOW THE TEXT MESSAGEÂ NOTIFICATIONSÂ TO FLOAT PAST YOURÂ CONSCIOUSNESS LIKE LEAVES ON A STREAM. I AM THE RIVER ROCKS...” 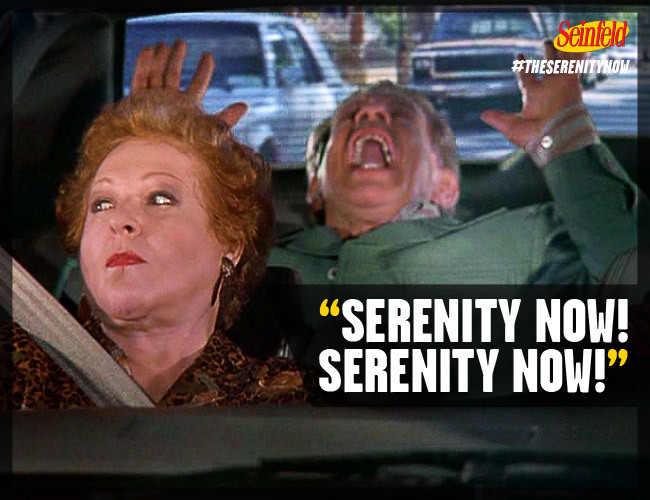 Debbie comes back – “How are you feeling?”
“Great…well except I think something is wrong with my phone, it keeps ringing and making noises. Anyway I’ll check it later…thanks Debbie! See you soon!”

(P.S. in all seriousness, acupuncture is AWESOME, I am a TRUE BELIEVER)

In the hot car, I look at my text message:

Naomichi Japan TV: Hey Ruth – sorry for changing again & again, but you will be on going to Japan 8/18-25? Again, they haven’t decided who is going yet.

Me: yes those dates would work too – i have a very flexible schedule for a possible trip to Japan! haha 🙂

I don’t hear anything back….

DON’T GET TOO EXCITED YET. LET ME KNOW!

Me: YES. Yes I will be available at all times, forever, to go to Japan.

In the words of Debbie the Acupuncturist “You said ‘yes’ right? I mean…I can’t think of any reason compelling enough to not drop everything and go to Japan…well…maybe a funeral…well but even then, maybe it would dependÂ how close you were to them. I mean! What am I saying? that’s soÂ morbid! Anyway, you said you could go right?”

Oh and then once again I didn’t hear anything back…

I decided it was time to Â do a celebratory hair dye job – hey at least there would be SOMETHING cool I could share on Facebook:

pretty dang cool! Whether or not I got to go to Japan, at least I had really cool hair!

Kai the translator called me while I was out running errandsÂ to let me know that the producers wanted to ask me some more questions, and would I be available next week to do some filming? (yes!) He wasn’t sure exactly when, and when I hadn’t heard back after a couple days, I sent a text:

30 mins later…
Kai Japan TV: 8/28 Sunday or 8/29 Monday, which do you prefer?
Kai Japan TV: It will be around 2:30 to 4:00pm ish
me: I prefer Sunday, but either day works for me, thanks!
Kai Japan TV: Nice, I will talk to my boss and will reply in an hour. Also, I have some additional questions, what is your email address?

WHAT? DO NOT GET YOUR HOPES UP YET.

I immediately ceased all other work in favor of crafting my own personalized dreamÂ itinerary to Japan. But where to start?! I hardly knew anything about Japan, much less specific destinations in relation to paper.

But wait! oh-so-conveniently, I’d been following the blog posts of fellow book artist Elissa Campbell of Blue Roof Bindery who had just finished a trip to Japan to visit all the best paperÂ destinations! Awesome! I read through her posts for ideas and whipped up this concise, briefÂ email (ha ha) with pictures! and web links! – Elissa if you’re reading this, thank you! I’m so glad you documented your wonderful trip, it was an invaluable resource:

This conversation I had with my friend Ellen pretty much sums up my feelings at this point:

At this point, four days out, I had NO IDEA what to think. I was almost sick with nerves! I mean, I didn’t even want to considerÂ the possibility that I won -Â most likely I was a finalist, and depending on this second interview I’d advance to the next stage. Even that was too incredible to hold in my mind too long. What was happening? My life had become full of unwanted suspense!

Kai got back to me with another text exchange:

Kai Japan TV: Ok so Sunday is perfect.Â We need an outdoor shot too, so let’s plan for Sunday and see how the weather turns out. Is that ok?
Me: Sounds good!
Kai Japan TV: Is your husband around this Sunday?
Me: Yes, he just asked “does Kai want to go surfing?”
Kai Japan TV: I wish, but I must convince my cameraman!!!!

Day of the filming:

You might note the time stamp there…I was too busy trying not to throw up from nervousness to check my text messages. Basically, they arrived half an hour early! SURPRISE!

Kai knocked loudly on the door, causing me to practically jump out of my skinÂ –
“great to see you guys! Ok! so I have some questions to ask you, are you ready?”
“umm, yeah I’ll do my best!”
“Ok, so what I’m going to do is I’ll go back out to the car, grab the questions which I’ve written on a board for reference, I’m going to knock on your door – please wait about 5 seconds, don’t just throw open the door – one one thousand, two one thousand, three one thousand, four one thousand, five one thousand – OPEN the door, we exchange greetings, then we’ll walk out front of your house and I’ll do the interview! Ok, five minutes! get ready!”

AAAAAAHHHHHHHHHH!!!!Â I’m getting nervous chills just re-counting the story! My heart was racing! I ran back to Ryan , told him what was going on, made him hide in my office with a view of the front of the house so he could capture the interview on camera for me.

I open the door, a big nervous smile plastered on my face, and this time the camera is on, pointing at me and Kai – “hello Ruth-san!”
“Oh hello Kai! Great to see you! How are you? What’s that? questions? great! ok! let’s go out to my yard! Yes we usually do that in August in Florida! Just stand in the yard at 2PM! Great idea! I will follow you – lead on!”

We walk to a spot in the front yard, Kai faces me, the camera is pointed right at me.

Kai: “Great to see you Ruth-san! Now, the producers have asked me to ask you a couple questions about Japan! here, they’re written on this board, you can just flip it over…”

*he hands me a foam board about 11″x14″*
Cautiously, I flip it over…itÂ looks like a postcardÂ covered in Japanese writing – I look questioningly at Kai…

What does it say?! fortunately my spy, Ryan, caught it all on video:

Kai: “Actually there’s only one question…DO YOU WANT TO COME TO JAPAN?!”

Kai still had to ask me questions about Japan on camera though! I have no idea what he asked, or what I replied! Who cares?! I’m going to Japan!!! I can’t believe it!Â

Then we had to go inside to “surprise” my secret spy Ryan! “I WON THE TRIP! I WON THE SHOW! I’M GOING TO JAPAAAAAANNNN” “YAYAYAYYAAY!”

cameraman: oh wait, I’m sorry guys, that was backlit, is it possible to reshoot that surprise part?

The we had to go BACK inside to “super surprise” my secret spy Ryan! “GUESS WHAT?! I WON THAT SHOW! I BET YOU HAD NO IDEA!” “WOW YAY THAT’S AWESOME AND I AM SO SURPRISED! YAYAYAY!”

This is the craziest thing that’s ever happened to me. I won a trip to Japan! To be on a show called “Who Wants to Come to Japan?”

ä¸–ç•Œï¼ãƒ‹ãƒƒãƒãƒ³è¡ŒããŸã„äººå¿œæ´å›£Japan
PREVIOUS POST ← Re: Japanese Media Inquiry, Possible Filming Request
NEXT POST I won a free trip to Japan!…Now what? →

This is my bookbinding studio desk!

Doing design work for the local NPR station has some great perks!

Thanks Rhonda!! Dream come true, for sure! Actually, how would I even dream about something like this? My dreams are usually more like “oh no! I’m late for my dentist appointment! AND I HAVE NOTHING TO WEAR BUT MY OLD PROM DRESS” hahaha

You never went to prom!
Mom

Mom, never let the truth get in the way of a good story! 😉

Congrats! What a great story. I can’t wait for the next installment. Now I want to go to Japan too :>)

Poppy. Go to Kyoto! The most incredible temples, including one of the most famous Zen gardens in Japan!

That was amazing. I love how you recounted every detail. The suspense was killing me too even though I know you went. I secretly thought I would have gone with you if Ryan could not, as your assistant. See you Saturday

Haha, I would have taken you, too! Thanks Louise 🙂